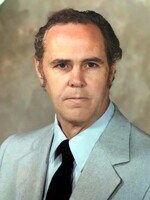 William J Morris, son of the late Catherine Carroll and William Morris lost his battle with Lymphoma on Feb 5th surrounded by Love and family at home in Deltona, Fl.

He previously lived in Kingston, NY and Lake Katrine NY before retiring to Deltona, Fl.

He leaves behind his children: Bill Morris and wife Valerie, Noreen Morris-Woerner and husband Michael and Jeffrey Morris.

His beloved wife Barbara Krum Morris predeceased him in 2014

His only grandson Billy Morris pre-deceased him.

He also leaves behind 7 great grandchildren and several nieces and nephews.

Bill leaves behind his sister and friend Mary DeBrosky (his only living sibling) as brothers Carroll, Eddie and Chickie along with sisters Nancy and Kathleen all died previously.

For those who knew Bill, they will tell you he was a mellow, easy going, kind and honest man with a knack for story telling. He would smile often and reminisce about the Great Depression, Catholic School, the Korean War, his work at I.B.M Kingston, and cutting wood with his brother in law Walt.

He was an accomplished athlete in his early days and won trophies for swimming, weight lifting and 5 k races. But most of all—he was an amazing father-his children always called him the very best Dad in the world and their Superman.