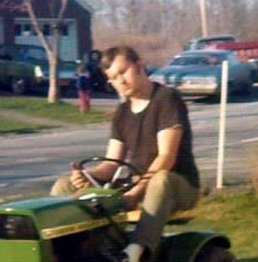 He was born in Kingston, New York on March 8th, 1954, a son of the late Frederick and Virginia (Hill) Flanigan.

Freddy was employed as a laundry attendant for Morgan Linen, Saugerties. He was later employed for over 6 years with LHV Precast, Town of Ulster. He was also a cemetery attendant with St. Mary's Cemetery, Kingston.

Freddy was a simple man who enjoyed sunny days under the shaded tree, taking a ride in his truck down to Posty Park in Town of Ulster to watch the boats on the Hudson River go by. He enjoyed feeding the animals that would come to his back door. He especially loved all of his fur babies, too many to name. Freddy had a name for every stray cat that came around. He was always willing to help when you needed it. He will be missed by everyone.

Freddy was an avid NASCAR fan and enjoyed working on his trucks.

In addition to his parents, he is predeceased by sister, Kathleen Gallagher (2018).

The family has entrusted the Gilpatric-VanVliet Funeral Home, 339 Broadway, Ulster Park, Town of Esopus, with the care and cremation service arrangements for Freddy.

A graveside service followed by inurnment in the family plot at St. Mary's Cemetery, Kingston will be held 11:00 am on Wednesday, April 20, 2022.